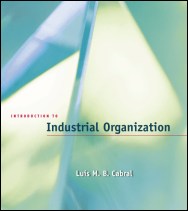 Industrial organization has changed a great deal in the past two decades.  Most importantly, it has evolved from a niche area in economics to a discipline that is studied not only by most economists but also by students and scholars in areas like finance, marketing and strategy.  The evolution of the status of IO was not properly accompanied by the supply of new IO texts.  This text attempts to fill the perceived gap: here, then, is a text that will appeal to a wide audience of readers, including not only economics students but also students from other areas who are interested in economics as part of their education.  Accordingly, the main features of the book are the following:

First, the book is an introduction.  This is naturally reflected by its length, between one third and one half of most other texts.  However, brevity is achieved not so much through superficiality in the treatment of each issue, but rather through greater selectivity in the list of topics addressed.


Second, the book is issue-driven rather than methodology-driven or literature-driven.  Although the text makes extensive use of models (because they are very useful ways of understanding reality), new models are only introduced when this is justified in terms of the marginal benefit in understanding some issue.